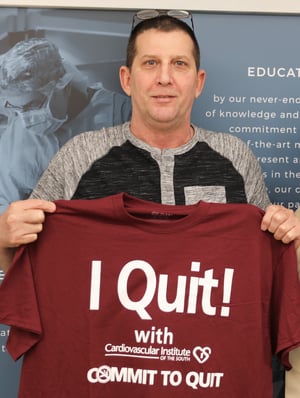 When life gives you lemons, and stress creeps in, it can be easy to slide back into old, bad habits. But for patient Michael Comeaux, the difficulties and struggles he faced turned into the inspiration he needed to remain tobacco-free for good.

Michael began smoking at the age of 17, and he had been a smoker for 40 years. His wife was a long-time cigarette smoker as well. Though she suffered from severe Chronic Obstructive Pulmonary Disease (COPD), they both felt it was too late for them to try to quit. At 55, Michael experienced a heart attack, but even this was not enough to keep him from quitting.

A TRUE REASON TO QUIT

In the same year as his heart attack, Michael’s right lung collapsed due to pneumonia. He was in the ICU for 28 days, having to heal and go through therapy to learn to walk again. He knew this was his opportunity to quit, while he was at his lowest point. He had tried only once before, but this time was different, and he set his mind to make the change. “I was ready to quit this time,” he said. “I finished my pack of cigarettes that day, and when I woke up in the morning, I never smoked again.”

Michael’s wife passed away soon thereafter—actually four days before he was discharged for his collapsed lung. Though it would have been easy to turn back to smoking, Michael kept his eye on the goal. “I didn’t look back,” he said. “I saw my wife suffer. I didn’t want to suffer like she did. Instead, I sought out help.”

REACHING OUT FOR SUPPORT

Michael visited nurse practitioner JD Meche at the CIS Crowley clinic. He was put on smoking cessation medication to assist with his quit. He was assigned a Licensed Behavioral Health Coordinator, Nicole Delahoussaye, who guided him during individual counseling sessions as he worked to stay quit.

The CIS Commit to Quit program includes physician visits, group and individual counseling, and medications—offering a comprehensive approach for the best chance of success. The CIS program actually has a quit rate that is five times the national average.

While taking part in the program, Michael’s family unfortunately suffered another loss. His 4-month old step-grandson passed away. But Michael had learned how to cope without turning back to cigarettes. Through these hardships, he managed to stay smoke-free, utilizing all of his components for support. 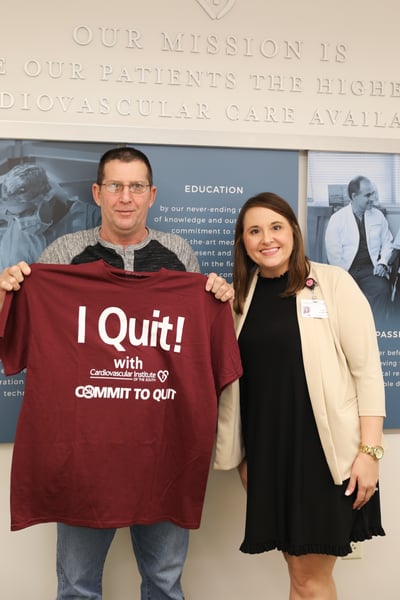 Michael has been quit now for almost a year. He uses his past experiences, as well as his family and grandkids, as his inspiration going forward and his incentive to stay quit. “I went through what I went through. I could have gone back to it,” he explained. “But I had the willpower, and I had the want to stop.”

Michael is most thankful for the resources and the staff support he received from CIS. “They are proud of me,” he said. “They said I am a strong person to be able to stop smoking—and remain quit— during what I went through in those two years.”

Michael’s story teaches us that, no matter what point we are in life, we can still make the choice to better our health. “It’s never too late,” he said. “If others would have seen how my wife suffered with COPD, and how she struggled to breathe, they would understand. It was a terrible death. And they would wake up.”

These images keep Michael from ever touching a cigarette again. Now he can’t stand the smell of cigarettes. Most importantly, he has seen an improvement in his health. “I can breathe much easier, smell more clearly, and I can really taste my food.”

Overall, Michael’s determination and commitment, and his willingness to seek help, made all the difference. He overcame adversity, and you can too. Learn more about our Commit to Quit program here.