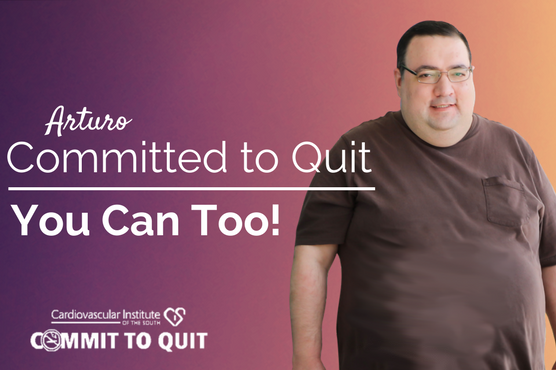 Arturo Quispe had been a smoker for more than 35 years when he took his mother to a doctor’s visit at Cardiovascular Institute of the South.  He had struggled with and overcome various threats to his health over his lifetime, but smoking was the one holdout that he could not seem to shake.  At the time that he walked through the CIS corridor alongside his mother, he was a long-time smoker of one to 1.5 packs per day.  But, that was before he saw the sign.

It was during this fateful doctor’s appointment meant for his mother’s health that Arturo’s attention was grabbed by something that promised to improve his own – a banner promoting the CIS smoking cessation program, Commit to Quit.

Like most smokers, Arturo had made his own attempts to quit over the years.  Once, it had lasted for 10 months, but the old habit always returned, and his health had suffered for it.  He had been diagnosed with COPD, had been wheelchair bound for a stretch of time, and had spent the entirety of the previous November sick with bronchitis.  It took three full rounds of steroids and antibiotics to finally overcome the illness.  He knew that in order to prevent his health from further declining, quitting smoking would be a necessary step.

As Arturo studied the sign, it was understandable that he may be skeptical, but something told him this was a program he should at least try.  After all these years, he was ready.  He wanted to improve his health and quality of life, and he wanted to be around as long as possible for those he loved.  So, he inquired about Commit to Quit, and decided that he should at least give it a shot.  That was over 300 days ago.

Arturo attributes his long-term success to many aspects of Commit to Quit, such as the medical professionals behind the program, but it was the availability of group therapy that helped him most of all.  He’s always found the support and feedback from a group of peers going through similar circumstances to be useful, and in this case, Arturo confirms that he once again “used the power of the group.”

Throughout the process, he has attended many group sessions, becoming close to other members who gave their support and relied on his in return.  Regardless of any difference in age, race, or religion, they were united by their shared goal to kick the habit and restore their health.  This inclusivity and encouragement was precisely what Arturo needed through one of his most difficult journeys.

Over the hundreds of days since Arturo smoked his last cigarette, he’s noticed a host of positive changes.  His health has improved, and his senses of taste and smell are heightened.  As a former chef, the ability to savor his meals, fully enjoying each flavor, is supremely important.  In addition, he has noticed another gratifying benefit – saving money.  As a heavy smoker, cutting out cigarettes entirely has saved Arturo about $150 each month, perhaps freeing up funds for a delicious meal that he can now fully enjoy.

If you are a smoker ready to quit for good, Commit to Quit can help.  Regardless of how much or for how long you may have smoked, our tailor-made approach is the key.  Whether it is the guidance of medical professionals, group support, or prescription medications that work for you, our program has the solution.  Ready to learn more?  Click below for additional details, including how and where you can get started.