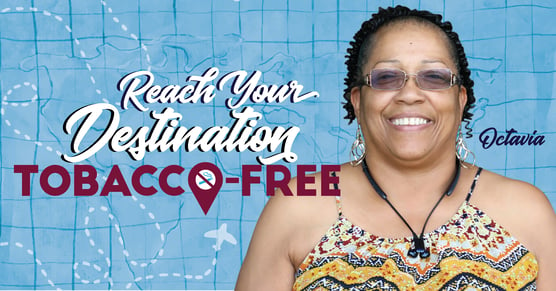 On July 5, 2017, Octavia Ledet had been experiencing a “heaviness” on her chest for three days.  Still, it wasn’t until her sister pointed out her labored breathing that she was finally convinced to go to the emergency room.  Once there, Octavia stood outside the doors a moment longer to finish her cigarette, not realizing that it would be her last.

During that ER visit, several severe blockages were found in her heart.  When she was finally released from the hospital, it would be with seven stents and a newfound commitment to live her healthiest life possible.  At 52-years-old and with a 33-year smoking habit that had reached three packs per day, it may not have been the easiest change to make, but Octavia’s commitment to remaining healthy for herself and her loved ones was unwavering.

The Path to Stop Smoking Permanently

Even before she was discharged from the hospital, Octavia’s cardiologist had referred her to the CIS Commit to Quit program, and her journey to leave smoking behind was already underway.  While she knew from past attempts that giving up cigarettes could be exceptionally difficult, she was also pleasantly surprised at how much smoother the process went with a dedicated team and medical professionals in her corner.

At her first appointment, she received some of the tools she needed to help along her journey like medication and patches, and she learned the full breadth of support available to her, including both group support and individual counseling.  But, it didn’t end there.  Far from it.  Rather than being handed resources and left on an island to navigate alone, Octavia was contacted frequently by her counselor who supported her along the way.  Quickly she realized that this program wouldn’t abandon her.  They truly cared and wanted to see her succeed.

After two months, she quit wearing the patches, and her medication had been gradually decreased.  Her health improved dramatically with lowered A1C and blood pressure levels.  Her senses of smell and taste were heightened, and for the first time in years, she was able to take a deep breath and exhale without coughing.  Of course, she still has urges, but she’s learned methods to distract herself from those as they’ve become fewer and less frequent.  Now, feeling better than she has in decades, Octavia has committed herself to helping others feel the same.

Octavia frequently shares her success with others and encourages them to begin their own journey to stop smoking.  She is an avid proponent of the Commit to Quit program based on her own experience and subsequent success.  Of those she has referred, eight are currently in the program, and many more are reaching out to her for her advice and encouragement.  Her optimistic and caring nature is infectious, as is her determination.

If you are ready to quit smoking for good and regain your health, Commit to Quit is the program to help you reach your goals. Aren’t sure if it’s the right move for you?  Just ask Octavia.  She’s always happy to help, and so are we.