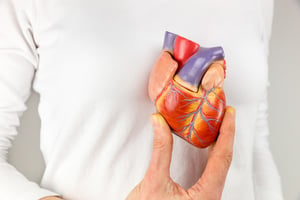 What is Heart Failure?

In very basic terms, heart failure occurs when the heart simply isn’t pumping as effectively as it should and is struggling to supply the body with the blood flow and oxygen it needs to survive and thrive.  This often occurs as the result of conditions such as uncontrolled high blood pressure or plaque build-up that leads to narrowed arteries.

What are the Types of Heart Failure?

Heart failure, also commonly referred to as congestive heart failure, can occur on the left side of the heart, the right side, or both. Most commonly, it begins in the heart's primary pumping chamber - the left ventricle. Each specific type of heart failure is accompanied by its own distinct characteristics:

Cases of left-sided heart failure can be further classified into one of two sub-types, characterized by the manner in which the ventricle is affected:

What are the Risk Factors Associated with Heart Failure?

While there may be no way to determine with one-hundred percent certainty who will develop heart failure, we can venture a highly educated guess with incredible accuracy by taking into account the following risk factors:

If you meet any of these, there is a higher than average likelihood that you will eventually among the 1 in 5 Americans who suffer from heart failure.

What are the Symptoms Associated with Heart Failure?

The body can provide many clues to the existence of heart failure.  The most commonly noted symptoms associated with the condition include:

What are the Complications of Heart Failure?

Having an impaired heart can lead to not only cardiovascular complications, but it can negatively affect other parts of the body as well.  Potential complications that can result from heart failure, include:

How is Heart Failure Diagnosed?

Heart failure is typically diagnosed through physical examination, medical history, symptoms, and diagnostic tests.  Tests we may use to aid in the diagnosis of heart failure include:

How is Heart Failure Treated?

Treatment for heart failure depends on the type, severity, and patient.  In many cases, initial treatment will include the use of medications to reduce fluid and ease pressure on the heart, making it easier to do its job.  These medications can include diuretics, beta blockers, ACE inhibitors, and more.

For those whose heart failure has become severe, is greatly threatening their health and quality of life, or has progressed despite treatment, more invasive methods may become necessary.  These can include coronary bypass, replacing or repairing damaged heart valves, implantable defibrillators, or in the most severe cases, heart transplant.