Take Your Health to Heart: Get a Checkup During Heart Month

BATON ROUGE- “I never saw the need to see a cardiologist,” said Kent Barton, 68, of Baton Rouge.  “I’m healthy and active, I don’t smoke, and I don’t have a history of heart disease in my family.”

But while working at a golf course on January 5, 2013, Barton could tell that something was not quite right.  He was lightheaded and dizzy, and he felt a slight tingling in his left arm.  “It alarmed me because it was something I hadn’t felt before,” he said.  “It just didn’t feel normal.”

Without hesitation, Barton knew he should head to the hospital.  Luckily, Baton Rouge General was only five minutes away.  Looking back, Barton reflected, “The good Lord must have been driving the truck for me, because I might not have made it.”

Barton walked into the emergency room and told the front desk that he thought he might be having a heart attack.  In that moment, he fell unconscious in front of the ER triage nurse.  A defibrillator pad was put on his chest which showed that he was in cardiac arrest, so his heart was shocked.  After his heart rhythm was stabilized, an electrocardiogram (EKG) test was performed, and it showed the effects and damages of a heart attack.

Dr. Amit Patel, interventional cardiologist at Cardiovascular Institute of the South, was called to the ER to review Barton’s case.  He saw the need for an intervention, and decided to take him to the catheterization laboratory immediately to perform a lifesaving procedure.  Dr. Patel and his team had to shock Barton’s heart 17 times before Dr. Patel was able to open his blockage in the cath lab.

“When you have a heart attack, time is muscle,” explained Dr. Patel.  “The faster we open the blockage, the better the outcome.”  But Dr. Patel noted that if someone is experiencing chest pain, 911 should be called immediately.  “Driving while having chest pain is like jumping off of a cliff without a parachute,” he warned.

Barton had five blockages that were nearly 100 percent blocked.  “They told my sons that I had a 10 percent chance of surviving,” he revealed.

Barton woke up about five days later and learned that he had had a heart attack, and that he had a blood condition that causes his blood to be thicker than normal.  “They said my platelet count was triple what it should have been,” he described.  “It was as thick as motor oil!”

The hospital staff said that Barton was one of the most critical patients they had ever seen, and he was told he would need a heart transplant or a temporary mechanical heart.  But despite his severe case, Barton’s health progressively improved through other methods of care, and he only needed bypass surgery for the remaining blockages in his heart.  “By the grace of God, I miraculously recovered!” he exclaimed. 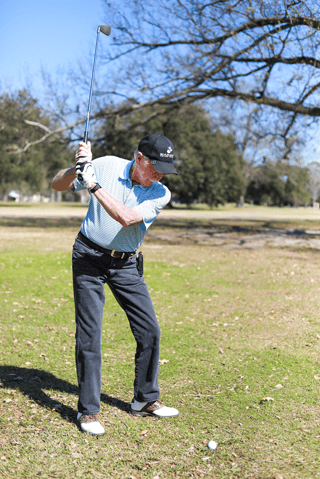 Three years have now passed since Barton’s heart attack.  He knows the importance of regular visits with his cardiologist, and he continually sees Dr. Patel every six months to monitor his condition and keep his medications current.  He is still active, and golfing remains a big part of his life, as he continues to play his favorite pastime multiple days a week.  “I can do anything and everything that I want; I just have to be careful not to overexert myself,” he explained.

Barton is also pleased with the personal care that he receives at CIS, saying that the staff is commendable.  “I can’t say enough about Dr. Patel’s staff and his facility.  They are very nice and accommodating, and they call me by name.”

Additionally, Barton said he holds Dr. Patel in high regard and trusts him with his care moving forward.  “He is very knowledgeable, intelligent and educated.  He explains everything and doesn’t rush through a visit.  He knows my history, and I trust that he stays on top of it.”

According to Barton, he is just grateful to be here.  “I’m a walking

miracle!” he exclaimed.  And he credits this to Dr. Patel, saying—“Dr. Patel is my hero!  He didn’t give up on me, and he saved my life!”

Knowing his situation, Barton has also referred many of his family and friends to CIS to be checked.  He encourages everyone to visit a cardiologist for a workup regardless of their age or risk factors.  “I would recommend for anyone to get a preventative visit,” he emphasized.  “I always thought I was healthy, and I didn’t have any common risk factors.  You just don’t know until you are checked.”

Do you know your risk of cardiovascular disease?  February is American Heart Month, so now is the perfect time to determine your risk factors and take preventative measures to lessen your risk.  To schedule an appointment, find the CIS location nearest you.