AFib Catheter Ablation: How Does it Work & Who Should Have it? 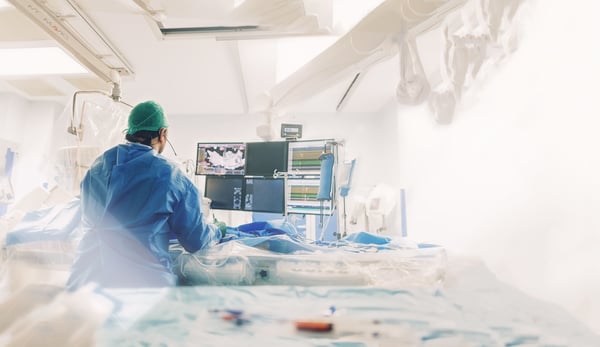 Atrial fibrillation (AFib) is a heart condition affecting over 2 million Americans.   As far as arrhythmias go, AFib is not only quite common, it can also pose some serious health threats.  The irregular, quivering heartbeat associated with AFib can be so aggressive at times that patients may feel as though their heart could leap from their chest.  It can be a frightening sensation, but the potential consequences are scarier still.  Although only 33 percent of AFib patients believe the condition is serious, it is known to increase risk of blood clots, stroke and heart failure.

What Happens During AFib?

During AFib, the upper chambers of the heart (atria) beat irregularly and out of coordination with the lower chambers (ventricles) due to chaotic electrical signals.  These episodes typically come and go, but in some cases, the heart rhythm does not return to normal on its own.  Over the course of an AFib episode, patients may feel symptoms such as heart palpitations, weakness and shortness of breath.

How Does Catheter Ablation Treat AFib?

Medication to help control the heart rhythm is a typical first line of defense in AFib treatment.  However, some patients may require more aggressive treatment based on the severity of their condition, how long it has persisted and how bothersome their symptoms are.  For these patients, a catheter ablation procedure is a common treatment method.

Catheter ablation is a common choice when AFib is the result of “hot spots,” or cells that rapidly fire electrical signals within the atria.  During the ablation, a catheter (long, thin tube) is guided to the heart via blood vessels in the groin.  This catheter tip is equipped with electrodes that can deliver radiofrequency energy, extreme heat or extreme cold to the tissue from which the erratic signals are developing, thereby destroying the problematic cells and restoring normal rhythm.

Who is a Candidate for AFib Ablation?

Not all patients with AFib will be ideally suited for catheter ablation.  Before considering the procedure, most electrophysiologists will take into account factors for candidacy such as:

Additionally, patients who receive catheter ablation are generally under 80 years of age and have a normal sized left atrium.

Across south Louisiana, Cardiovascular Institute of the South is home to five highly qualified electrophysiologists. These specialists focus exclusively on electrical signals and arrhythmias of the heart, including AFib.  If you have been diagnosed with the condition or fear you may have it, contact us to request an appointment with one of these physcians.