Larry Yarborough, 74, of Grants Pass, Oregon was suffering from extreme pain and swelling in his legs. After finding Cardiovascular Institute of the South online, he wrote a letter to interventional cardiologist Dr. Nayan Agarwal and traveled to Baton Rouge to see him. “I knew I needed to see him,” explained Yarborough. “I had to get help because I was in terrible shape. I thought my legs would be swollen for the rest of my life.”

Yarborough had had three recent operations in Medford, Oregon that were unsuccessful in treating his pain. “I couldn’t even walk,” he said. “I was sleeping for only two hours at a time, if that, because the pain would wake me up. The circulation was so bad, and I had extreme pain.” He couldn’t even complete simple household tasks or go out to dinner due to his pain. He was suffering from a complex case of peripheral artery disease, or PAD.

PAD occurs when peripheral arteries, most commonly in the legs, have plaque build-up or blockages, restricting blood flow. These blockages keep extremities and organs from receiving oxygenated blood. Just like clogged arteries in the heart, blocked arteries in the legs raise the risk of heart attacks and strokes. PAD is a common and treatable condition; however if left untreated, it can decrease quality of life and lead to amputation.

When Yarborough came to CIS, Dr. Agarwal explained how he could help with interventional procedures and stents. The procedure would increase the circulation in Yarborough’s right leg, which was in worse shape. Yarborough chose to proceed with the procedure while he was in town. “I needed relief because I was in so much pain,” he recalled. 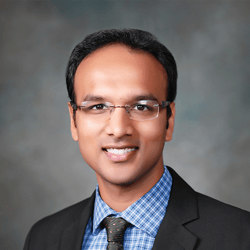 In May, Dr. Agarwal performed a peripheral angiogram on Yarborough, using his wrist as an access point. The angiogram showed he had extensive PAD with occluded superficial femoral arteries (SFA) in both legs, an occluded left common iliac artery, and a patent femoral-femoral bypass from right to left. “His options were very limited due to prior failed surgeries and challenging anatomy,” explained Dr. Agarwal. After discussing with the patient, Dr. Agarwal proceeded with a high-risk intervention from his right arm and opened up his entire right SFA using drug-coated balloons and stents. Right after the procedure, his right foot which was cool and dusky before, had started to warm up with improvement in color. He stayed one night post-procedure and on his post-op follow up a week later, he was already feeling tremendously better.

After the procedure, Yarborough immediately noticed the pain had subsided. “Finally, the pain that kept me up at night was gone. It was the first time in years that I could sleep.” He was able to go home, at peace that his trip brought the recovery he desperately longed for.

Today, Yarborough says the pain from the blockage is gone completely. He still has minor swelling in both legs, but it is manageable. He continues to see Dr. Agarwal virtually via telemedicine for follow ups.

He even walks every morning for exercise. “Before, I couldn’t even walk or stand for a few minutes to wash the dishes,” he explained. “Now, because of Dr. Agarwal, I’m able to walk the hill behind the house. It’s a ¼ mile high, and I walk up and back most mornings.” Most importantly, he can now do things he enjoys, like going to dinner with friends or family.

He says the travel from Oregon to Baton Rouge was worth the trip. “I had been through the ringer, and Dr. Agarwal is the only one who was finally able to help me tremendously. He is an absolute exceptional physician.”

Yarborough encourages others who suffer from leg pain and swelling to get a second opinion or seek a physician at Cardiovascular Institute of the South. “If I can help someone else, I certainly want to,” he explained. “Being able to walk again is an absolute gift.”

If you suffer from leg pain or swelling, schedule an appointment today with a CIS cardiologist near you.